An Evening with Shaun Ryder 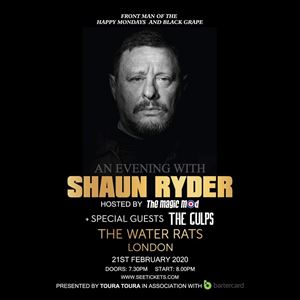 All An evening with Shaun Ryder performances

Shaun William George Ryder (born 23 August 1962) is an English singer, songwriter, television personality and author. As the lead singer of the Happy Mondays he was a leading figure in the Madchester cultural scene in the late 1980s.[1] In 1993 he formed another band, Black Grape.

Ryder was the runner-up of the tenth series of I'm a Celebrity...Get Me Out of Here!. The film 24 Hour Party People featured the story of Ryder's youth.

Join Shaun as he discusses his life, career & the music industry

You will also have the opportunity to ask Shaun a question.