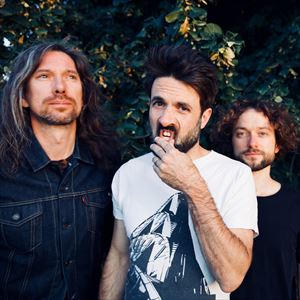 Clock Opera return to Bristol for an eagerly anticipated show to promote their 3rd album 'Carousel'.

16+ only. 16s to 17s must be accompanied by an adult. No refunds will be given for incorrectly booked tickets.

DGM Presents are delighted to welcome Clock Opera 'home' to The Louisiana in this re-scheduled show as part of their new album tour.

**The original date was 25 March, and all tickets remain valid** We are pleased to have tickets back on sale and the band really can't wait to play in Bristol again after such a long wait!

'Be Somebody Else', released in September, is the first track from the band's eagerly anticipated 3rd album ('Carousel').

“I’ve seen the future and it looks just like today, with all the failures and the waiting cut away” sings Guy Connelly, Clock Opera’s frontman. The energetic single conjures up a mosaic of staccato synths, distorted bass clarinets and blissed ambient textures, as Clock Opera delve into the schizophrenic distance between self-acceptance and the hyped-up versions we present online.

The wonderfully atmospheric title track with it's beautifully repeating piano refrain followed in November with the new album ('Carousel') promised for 7 February.

Clock Opera originally rose to prominence in 2012 with their debut ‘Ways To Forget’, together with a raft of well-loved remixes for Everything Everything, Christine & The Queens, Metronomy, Blood Orange, Charlotte Gainsbourg, Marina & The Diamonds amongst many others.

Advance tickets are just £10 (+booking fee), the venue is 16+ and under 18s must be accompanied by an adult.