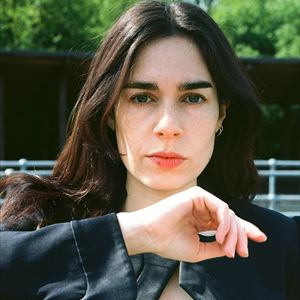 “Quite simply, O’Brien is a hell of a performer” - NME

“another new, idiosyncratic voice coming from across the Atlantic” - Stereogum

Irish poet and performer Sinead O’Brien has today shared her new track ‘Strangers In Danger’ and announced her debut EP Drowning In Blessings will be released on 16 September. Produced by Dan Carey (Speedy Wundergroud, Fontaines DC, Kate Tempest) the EP is O’Brien’s first fuller body of work following a string of rapturously received singles including ‘Taking On Time’, ‘A Thing You Call Joy’, ‘Fall With Me’ - and recent release ‘Roman Ruins’. O’Brien has also just announced a March 2021 U.K. headline tour.

Originally from Limerick, O’Brien’s work captures the everyday and the inbetween in a way that transcends any genre label. Writing from her own observations, O’Brien’s influences can be found in the realism of Mark E. Smith of The Fall, Patti Smith and The Slits, and the works of literary icons such Frank O’Hara, W.B. Yeats, Joan Didion and Albert Camus.  Releases to date have drawn admiration from British and American outlets and radio stations as diverse as The FADER, Stereogum, The Guardian, Loud And Quiet, The Quietus, BBC Radio 1 and BBC Radio 6 Music, and more.

‘Strangers In Danger’ examines O’Brien’s rumination of coexistence between the artificial and the ordinary from the outskirts and margins.  She explains “I had a strange epiphany during a gig. “Plastic flowers in bloom and the sound of soccer”. I couldn’t make sense of it - I wrote it down and later began to take it apart. It’s about a kind of duality where something is divided by having two apparently conflicting meanings. A feeling is mirrored in an external scene and illustrated in another language. The image simplifies the problem because it just is. It exists. With all of its complexities and contradictions. I felt connected to various images and occurrences around me and began sound-tracking these mini scenarios.”

“Scenes play out in windows, on streets, inside homes; It’s about spaces, claiming personal space in the city, naming things, bringing them closer. Feeling out the distance and tension between people.” The exploration of minor complexities in Strangers In Danger allows O’Brien to guide us through these spaces. “You are carried through the rooms and immersed in the different levels and sequences of the piece. I experience it in a linear format from left to right - like a stretched out painting.”

A multifaceted artist, O’Brien’s writing has also been published by the esteemed London Magazine whose alumni include T.S. Eliot, Sylvia Plath and William Burroughs. Her unique fusion of spoken lyrics and art rock has piqued the attention of luminaries of both fields, seeing her perform with John Cooper Clarke and The Brian Jonestown Massacre at sold out theatres across the U.K. Playing live with her band and collaborators; Julian Hanson (guitar) and Oscar Robertson (drums), Sinead O’Brien’s transfixing performances are placing her at the forefront of a wave of independent British and Irish talent that is taking over the capital and beyond.