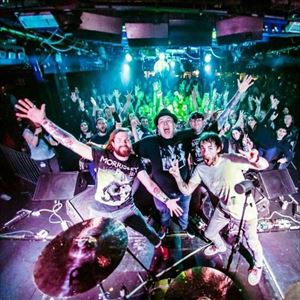 All The Ataris performances

Indiana-bred pop-punk outfit the Ataris gained cult status in the late '90s with a series of albums before gaining independent chart success with 2001's End Is Forever. The group, led by singer/guitarist Kris Roe, gained widespread attention with 2003's So Long, Astoria, which included a cover of Don Henley's "Boys of Summer," hitting number 24 on the Billboard 200. Despite line-up changes, Roe continues to lead the group, touring often and showcasing his knack for alt-rock hooks on albums like 2007's Welcome the Night and 2016's October in This Railroad Earth.

Formed in 1996 in Anderson, Indiana, the Ataris originally began as the home demo-recording project of lead singer/guitarist Kristopher Roe and guitarist Jasin Thomason. The group were discovered a year later by Vandals founder Joe Escalante after songwriter Kris Roe met him at a concert. Impressed by his demo tape, Escalante asked Roe to put together a full band and record for his label, Kung-Fu Records. Roe then picked up and moved to California in search of bandmates (Thomason decided to stay in Indiana), and eventually added guitarist Marco Peña, bassist Mike Davenport, and former Lagwagon drummer Derrick Plourde. Plourde was later replaced by new drummer Chris Knapp.

The newly formed Ataris made their first record, Anywhere But Here, for Kung-Fu and soon came to the notice of Fat Wreck Chords owner Fat Mike. Realizing the opportunity to move to a stronger, more well-grounded label, the Ataris willingly signed to Fat Wreck. They quickly issued an EP, Look Forward to Failure, produced by several members of the Descendents. Early in 1999, the band released their second full-length album, Blue Skies, Broken Hearts...Next 12 Exits. After the album's release, they toured with MxPx, blink-182, and Homegrown before issuing Let It Burn in 2000. End Is Forever followed in 2001.

The Ataris made the leap to the majors with 2003's So Long, Astoria on Columbia. The album featured new guitarist John Collura; it sold well and tracks like "In This Diary" and the Don Henley cover "The Boys of Summer" were successful on MTV and the modern rock charts. Live at the Metro followed in February 2004. After spending several months recording their fifth album and Astoria follow-up, the Ataris chose to leave Columbia in early summer 2006 amid much turnover in the label's staff and rumors of an impending merger with Epic. The album's July release was consequently delayed, though the band pressed on label-less with various South American tour dates.

Sonic and line-up changes also ensued, and by this time, the band had expanded to seven members with Roe, Collura, guitarist/vocalist Paul Carabello, cellist Angus Cooke, keyboardist Bob Hoag, bassist Sean Hansen, and drummer Shane Chikeles. They eventually created their own label, Isola Recordings, and through a partnership with Sanctuary finally issued Welcome the Night, a darker, more rock-based effort, in February 2007. Over the next few years, the band stayed busy touring and recording. They issued several EPs including the 2012 four-track offering The Graveyard of the Atlantic. In 2016, they released another EP, October in This Railroad Earth. A compilation album, Silver Turns to Rust, also arrived in 2016, as did the split album Let It Burn with Israel's Useless I.D.. The following year, the Ataris joined the line-up of the Vans Warped Tour.