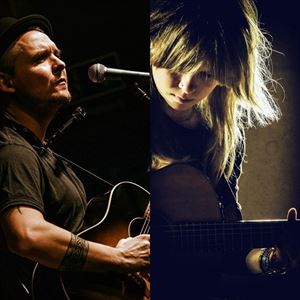 Sean Taylor’s unique songwriting is a late-night cocktail of Tom Waits, Leonard Cohen and Jack Kerouac; With voice that is a cross between John Martyn and Van Morrison and a guitar style that sounds like an acoustic Stevie Ray Vaughan jamming with JJ Cale … His live shows fuse world class songwriting with stories from the road.

Promoting his new album ‘The Path Into Blue’ Sean Taylor is one of the most exciting and hard-working names on the international roots and blues circuit. Sean plays over 150 gigs around the world every year touring solo and with his band.

‘Sean Taylor is a wonderfully talented modern troubadour whose sincere, thoughtful songs pull you in. I've had the pleasure of sharing the stage with him. He swings. Check him out’ - Eric Bibb

‘Sean Taylor's work just gets classier ... His talent might yet puncture the mainstream’ - Classic Rock 8/10

‘A fine young musician, songwriter and great geezer. I have nothing but admiration for the dedication to his craft’ - Danny Thompson

Every once in a while, we are blessed with a singer who is quite simply born to write and perform exquisite songs with confident, gentle assurance. Based in the UK, Katie Spencer is a progressive-folk singer songwriter and guitarist inspired by the people and her surroundings in the Yorkshire countryside. Spencer has gigged extensively in the past three years both headlining and supporting established artists - most recently opening shows for Ralph McTell, Bridget St John, Michael Chapman, Ian Hunter (Mott The Hoople) and Martin Stephenson & The Daintees. She has also received radio play from the likes of Iain Anderson – BBC Radio Scotland, and BBC Introducing.

The Spring of 2019 will see Katie embarking on a UK tour, in celebration of her debut full-length album ‘Weather Beaten’ to be released on 1st March 2019. Included in her tour will be a very special date for Celtic Connections at Glasgow’s Royal Concert Hall, an evening dedicated to the powerful legacy of John Martyn.

Her debut studio release ‘Good Morning Sky’ was released in May 2017 and saw Katie working with a number of outstanding musicians, namely the late Ted McKenna (Rory Gallagher, SAHB) and Foss Paterson (John Martyn, Jethro Tull). Recorded in Glasgow, the atmosphere of the Mini-Album “recalls some of the essence of [John] Martyn's best music. The songs are treated to a delicate and mature guitar style to go with her distinctively graceful voice”, Northern Sky Magazine.

'Katie’s guitar playing has echoes of my dear friend the late great Bert Jansch.?Like a musical weaver she threads her poetic lyrics through the guitar’s strings and produces little tapestries of song.' – Ralph McTell

'Haunting, escapist and moving…' - Three Chords and The Truth