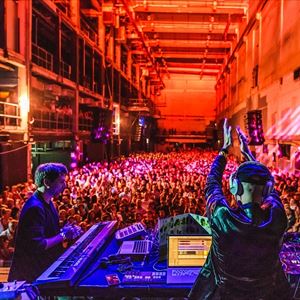 We are honoured to invite Global Communication's Tom Middleton to The Jazz Cafe to perform classics from the GC catalogue, such as 76:14, Incidental Harmony, The Way, The Deep plus brand new forthcoming material under the GC moniker.

The acclaimed British electronic and ambient act originally made up of Tom Middleton and Mark Pritchard were responsible for arguably the most revered ambient techno album to come out of the UK with 76:14 and rarely perform live on stage.

With this incredible new live show, Tom Middleton will perform live accompanied by the multi-instrumentalist composer/arranger Ross Sampson (Pisces Rising) and a string ensemble, helping to transform the GC sound from electronic to Neo-Classical and translate from DAW to stage.

Tom was celebrated as Game Changer in this month's DJ Mag; the official Global Communication 76:14 remastered album release is due via Evolution / Warp Records in the Summer.

New material from Tom's new incarnation GCOM will be forthcoming via K7 Records later in the year.

Special guest Andy Gangadeen (Chase and Status) brings his pioneering and peerless drumming and programming skills to elevate the live experience with raw energy, feeling, dynamics and dimension. A huge name in electronic drumming and live drum and bass, Andy's a huge fan of Global Communication having also played on the single "The Groove".